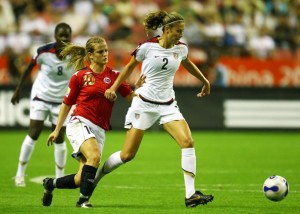 There is something about the incredible thrill that comes into the air whenever there is a FIFA event taking place. You wake up that morning wondering what the outcome will be, planning the rest of your day around all that it can offer to you. But, what happens when you want to enjoy that type of entertainment but you cannot do so because the event is not available in your area? What if you want to be able to watch the event even though it happened two days ago? In some cases, you are limited and do not have standards access to such events. But, you can stream it on services like BBC iPlayer. When you use zoogvpn, you gain access to everything you want to see, but you are not limited by location, price, or even time. It makes viewing events like the FIFA Women’s World Cup far easier to do.

There is a lot of excitement in the air surrounding the women’s world cup this year. The 2015 event will bring together numerous international football (soccer) players that are competing at the highest level possible. The event only happens one time every four years making it one of the most sought after events for those who play the sport. Did you know that the first women’s event did not happen until 1991? The men’s world cup, on the other hand, began some 61 years before that. The international competition is fierce. Since that first event, in which the United States women’s team took on and beat Norway’s team, there has been a great deal of competition between countries. Japan is the current world cup holder – of course, you may see that change once the 2015 games take place!

The current format involves 24 teams. Each of these teams will play at various times over the timeframe. They will play throughout Canada, which is the host country for this year’s events. Going from one game to the next is going to be thrilling. You will be able to see some of the best soccer action take place on the pitch like you have never seen before. It can be one of the most impressive experiences. This year’s events will come down to eight teams making it to the World Cup Finals. These individuals will begin playing each other from June 6through through July 5th to determine which one is going to be the top rated women’s team of the year.

Are You Going to Be Watching the FIFA Women’s World Cup for 2015?

Let’s face it. There will be numerous reasons to watch the games. You will get to see some of the world’s most talented soccer players battling each other in order to earn a title for their team. You will see passion and hard work come out with each kick and goal. Most importantly, if you love the game of football, you will see an incredible amount of excitement from the first game to the final game. This is the type of sporting event that does not happen every often and it makes sense that you would want to watch it every time it does occur.

Where to Watch the Fifa Women’s World Cup

With zoogvpn, you are able to stream the 2015 FIFA World Cup on BBC iPlayer and watch it when you want to watch it, where you want to watch it, and even over and over again! Streaming the game is the perfect way to get the coverage you need at a lower cost and not miss one second of the action. Check out how ZoogVPN  VPN can transform the way you are watching all of your favorite games.