What to Watch on Netflix outside US this January 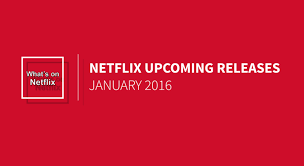 The holiday season is over and January is here. While you are trying to slowly adjust to your standard routine (or you are making certain changes in your life) there is no doubt that you are still interested in watching some good TV shows and movies. Luckily, you have many choices where you can satisfy your need for good pieces of cinematography. If you are subscribed to Netflix you can definitely count on a huge number of good movies and TV shows this January. This month is especially joyful for TV show lovers because there are several new TV shows and a few old shows with new seasons that will become available in the first month of 2016. You can watch these features on Netflix outside US.

If we start describing and explaining all the movies and TV shows you can watch on Netflix outside US this January, we will need several pages to cover everything. This is the reason why we have decided to highlight some of the movies that we find most attractive. Of course, we will mention the new shows and new seasons of existing shows.

Let’s start with a classic – Training Day. Even though this movie was premiered in 2001, it is still one of the best movies of all time. If you love crime and drama movies, you will like Training Day. The story is focused on a new police officer assigned to a veteran police officer that keeps many secrets. Ethan Hawke and Denzel Washington had one of their best performances in this movie.

Emma Roberts is the main star in the movie called Adult World that will be aired on Netflix this January. This is actually a comedy movie about a college graduate who thinks that she is a great poet. She needs money to support her career, so she starts working in a sex shop. This is where the funny situations start.

Netflix will also present some fresh movies from 2015 like The Last Five Years. This is another comedy movie, but this time with elements of musical movies. A couple in love, is trying to analyze their current relationship and consider all the things that can lead to a stronger relationship.

Another new movie (2015) will be available on Netflix from January 15. The Overnight represents a perfect combination of comedy and mystery. A family of three that has just moved to LA is eager to meet their neighbors. The dinner becomes very interesting thanks to the mysterious neighbors.

Some people describe Turbo Kid as a very messy movie that incorporates genres that are not very compatible, so if you are ready to watch a movie that is out of the ordinary watch Turbo Kid on January 25.

When we are talking about TV shows, we will first mention Degrassi: The Next Class. You have probably heard about Degrassi, but this is a completely new generation of high school kids with unique problems.

The first season of Sirens was quite successful and starting from January 15, fans can watch the second season of this show. Once again, we will follow the mishaps of three emergency medical technicians. Overall, this is a nice funny comedy show.

Finally, on the same date you users will be able to watch the second season of When Calls the Heart. This drama TV show is especially popular among women.

How to watch Netflix if you are not in the USA?

This is a very common question because US Netflix is officially available only in the United States. However, if you use a good VPN service like zoogvpn, you will be able to cover your IP and replace it with an American IP which means that you will be able to watch Netflix outside US from any place in the world.