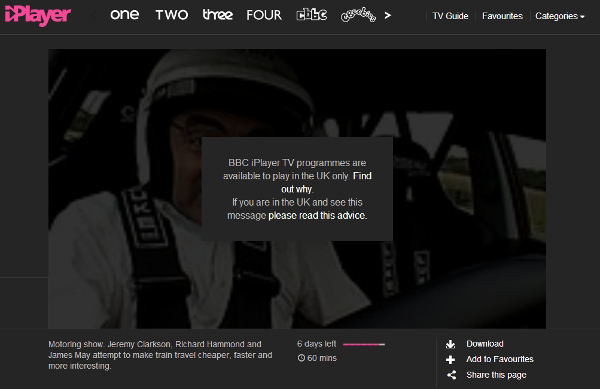 According to some statistics, there are more than 60 million active viewers of BBC iPlayer abroad. Those who are wondering how is this possible, have probably never heard about VPN – Virtual Private Network. There are few other tools that can help people get access to geo-restricted online platforms, but VPN has proven to be the most effective one. There are many VPN service providers offering deals that can help people cover/replace their IP addresses with an IP address that comes from the country of their choosing. In other words, with the help of a reliable VPN service you can access any website you want from any location in the world.

When it comes to VPN used for accessing BBC iPlayer, most of the users using these services are expats who want to stay in touch with their favorite program. Of course, there are some foreigners who enjoy their programming. In the last few days, most of them were unpleasantly surprised when they tried to access BBC iPlayer. They have received the same message they get when they are trying to use the service without the help of VPN. This is not a problem only for those who are outside the UK, but also for people living in the UK who use VPN services for additional online privacy (another benefit of using VPN services).

This situation has confused many VPN users who were wondering whether their accounts were hacked. It turns out that the reason for this problem is the decision of BBC to block UK-based VPN servers. Of course, these servers should provide maximum security and anonymity, but it looks like BBC has found a way to block some of them. They have officially confirmed that they are using sophisticated technology that is able to block access of some VPN users. The BBC is continuously investing in the development of software solutions that are able to prevent access of users outside UK. Their main concern is the possibility for hacking and as they say “pirate” attacks. They have also mentioned that they are fully aware that a lot of organizations and institutions like schools, universities and libraries use VPN servers and that this situation can affect them too, but they claim that they are doing everything they can to unblock these institutions. They also recommend turning off VPN services before accessing iPlayer because in this way users won’t experience any problems.

In addition, they say that they are also aware that many UK users who are worried about their online privacy and anonymity will be affected by their decision, but they have not yet found a way to separate the privacy-aware users from possible hackers and abusers.

This news has triggered a negative reaction among VPN users and raised concern among popular VPN service providers. Some of them have already hired experts that will try to bypass this latest blockade imposed by BBC. They believe that this problem can be solved fast. On the other hand, there are certain VPN service providers that were not affected by this latest change introduced by BBC.

ZoogVPN is working perfectly fine with BBC iPlayer. We provide fast customer service for all of our users who are facing certain issues. On the other hand, we are always working to improve our VPN service and this is probably the reason why our service was not affected by this (poor) decision made by BBC.

Stream the Tokyo Olympics with a VPN
VPN for TikTok – Are Virtual Private Networks the Answer?
Hong Kong VPN Demand Skyrockets– Here’s Why
Enjoy 10GB Of Bandwidth with our Free VPN Plan
How has Coronavirus managed to Affect the Online World